Fish is good for you, how many times have you heard that. So N and I decided that, as recommended, we would try to incorporate fish into our diet at least twice a week. The problem is until a few years ago I only used to eat three types of fish – tuna, salmon and cod. It doesn’t take a statistician to work out that with only three choices you’re going to run out of combinations pretty quick. So I’ve had no choice but to open my mind up to new types of fish. My list now includes sea bass, haddock, monkfish, pollock, mackerel and sole. I’m generally open to trying anything once but I tend to avoid flat bony fish. I just don’t get the point, there’s not enough meat on it and even if they’re deboned you still get the tiny bones which makes eating dinner far too much hard work!
Now that I’m more comfortable with the fish world I thought I’d do a bit of research into which fish is best for you and which varieties are in limited supply. I warn you now it’s a minefield out there. Apparently you shouldn’t eat too much oily fish as they have low level pollutants. This goes for some types of white fish too. As for watching the world’s fish population the same types of fish can be endangered from one area and fine from another area. After reading this I was more confused than when I first started so as a result I’m not going to tell you what you should and shouldn’t eat, and to be honest I don’t think I really know enough to give you any educated advice! But what I have decided after my limited research is that you really need to mix and match as much as possible. In other words everything in moderation. I love that saying, it applies to everything in life and particularly to what you eat. N & I try to use the 80:20 rule. If you eat well 80% of the time you can eat what you like for the other 20%.

I think fish and chips would fall into the 20% bracket...or does it? Well the chip shop version definitely does. It always seems like a good idea at the time, especially when you’re starving. But half way through it I tend to regret it, especially when I remember it has no goodness in it and it’s actually pretty stodgy. So I’ve made my own version. It’s quick, tastes great and is pretty healthy. I like to think it falls into the 80% bracket. Actually it’s not completely my version, credit where credit is due. The co-creator of the crumb topping is a wonderful cook named Sheena. Strangely we use pretty much the same ingredients and we discussed how to make it beforehand yet our versions are quite different. Her's is very much a coating. It’s more moist, forms a paste and when cooked becomes part of the fish. Mine is more of a crispy crumb topping that sits happily on top of the fish. If anyone fancies Sheena’s version just post a message, I’m sure we can coerce her into writing a comment… 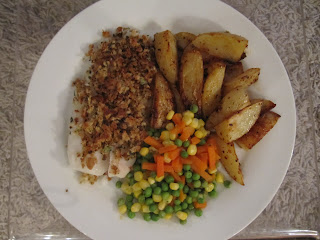 
To make the wedges


·         Pour over the olive oil and the Cajun spice. Toss the wedges so they are all coated as evenly as possible. Add a bit more olive oil or spice if you need to


·         Place uncovered in the middle shelf of the oven for 40 minutes or until the potatoes are cooked through. You should shake the tray and move the potatoes around about half way through. NOTE: this is also roughly the stage at which you will be adding the fish so you will need to move the wedges down to the bottom shelf


To make the fish


Whilst your wedges are cooking…


·         Chop the bread into smaller pieces and whizz in a food processor until they resemble breadcrumbs.


·         Pan fry the breadcrumbs in the oil until they brown slightly


·         Place the fish fillets into an oven tray. Drizzle on some olive oil. I also add a little bit of dry tarragon and black pepper on to the fish but this is up to you


·         Spoon on the breadcrumb mixture evenly between the two fillets. Pat down so it sticks to the fish a little


·         Cover the oven tray with foil and place on the middle shelf of the oven. NOTE: you will need to move the wedges down to the bottom shelf at this stage


·         Before serving it is nice to grill the fish uncovered on a medium setting for a few minutes in order to toast the breadcrumbs. The wedges can stay on the bottom shelf during this time without any problem.

Serve with steamed or boiled vegetables, tomato ketchup and tartar sauce (if you have it). 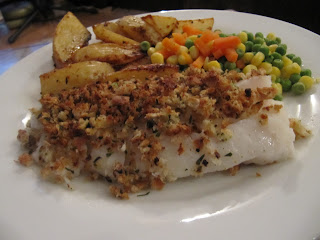