My god, where do the weeks go? I can’t believe it’s been three weeks since I posted anything on this blog. I am absolutely ashamed of myself. But unfortunately real life seems to have gotten the better of me recently. Between working, commuting and looking after the house and the hubby there really aren’t enough hours in the day. Although, that’s not completely true. I have managed to squeeze in some essential Olympics time.


Yesterday we spent the day at the Olympic Park. Although I try not to think about how much money the Olympics has cost the tax payer I have to admit they’ve done an amazing job on the Olympic Village. It’s well designed and well organised and it really is such a wonderful experience to be part of it. I’m not sure the experience of buying tickets can be praised quite as much. To be honest it all looked so stressful I didn’t even bother trying to do it myself. Luckily N’s sister has a lot more energy with these things than me and she kindly invited us along to watch the men’s hockey. The buzz and the adrenaline of being there in the stadium is indescribable (the Olympics as a whole that is, the match itself was a little one-sided with Australia beating Pakistan 7-0)! My favourite event so far has definitely been the athletics, for which I have sat glued to the TV for hours. For me, that’s what the Olympics are all about. N and I seem to have had more conversations about Usain Bolt this week than about anything else!


So, even after a long day at the Olympics yesterday, dinner still had to be made. I had bought some monkfish fillets the other day, but was still undecided on how I was going to cook them. I love monkfish as it’s so versatile and not too ‘fishy’! I normally cut them into medallions (quite apt for a post-Olympic meal) and add them to pasta or a fish stew. But yesterday I fancied something different. I conjured up a dish with lemon, garlic and rosemary. It was definitely a winner, so much so that N offered to give it a gold medal! 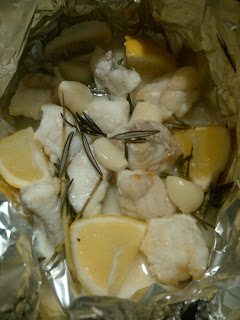 - Sprinkle some salt on the monkfish about an hour before cooking to draw out any excess water
- Heat the oven to 180 degrees fan
- Pat the monkfish medallions dry with a paper towel and season with salt and pepper
- Heat some olive oil in a non stick frying pan and pan fry the monkfish for about 2 minutes on each side
- Lay a piece of foil on a baking tray and transfer the monkfish to the centre of the foil using a slotted spoon. You do not want to transfer any of the liquid
Nestle the cloves of garlic and the rosemary in amongst the monkfish
- Squeeze a little lemon juice of the fish and arrange the remaining lemon wedges between the fish pieces
- Fold the foil into a parcel and place in the oven for about 15-20 minutes or until the fish is cooked through
- Serve with wild rice or potatoes and vegetables of your choice