The translation of the word tiramisu is pick-me-up. What an apt meaning for such a beautiful dessert. It is also known as the Tuscan trifle, which again describes it so perfectly. The mixture of the layers you get when you dig that spoon in all the way to the bottom is like heaven. Sponge soaked in bitter coffee laced with the taste of almonds and balanced perfectly by the sweet creamy marscapone custard. My mouth is watering as I type this.

This has probably got to be N's favourite dessert. He tells me his addiction started some years ago on a family holiday to Barcelona. They were at a cafe on La Ramblas having coffee when he was coaxed into having something sweet to eat by his sister. He was reluctant as he was going through a healthy phase but he soon succumbed to the peer pressure and picked the tiramisu from the photos on the no-doubt laminated menu. And there started his love affair with this Italian dessert. N tells me that he has never had a tiramisu as tasty as the one he had that day. And boy has he tried. He orders one in every restaurant that serves it and has bought it in every supermarket we've shopped at, yet there is always something wrong with it. His usual complaint is that the taste of alcohol is too overpowering.

I'd never really thought to try making it until I saw Rachel Allen making some individual versions on TV recently. It inspired me to add some marscapone cheese on to my next supermarket delivery. I liked the thought of an almond flavour which Rachel achieved by using almond liquour but I decided that rather than risk putting too much alcohol in it I would skip the alcohol all together. I achieved the same flavour by using a few drops of almond extract. These desserts were beautiful. They took 15 mins to make and they tasted divine. N said he'd finally found one as good as La Ramblas, I suspect he was just being nice but even I have to admit they tasted pretty amazing!

Ingredients (serves 2)
70g marscapone cheese
30g caster sugar
1 egg (separated)
Bowl of strong coffee
Amaretti biscuits
Almond extract
Cocoa powder
Chocolate sprinkles
Method:
- soak the ameretti biscuits in the coffee until they soften
- place the egg white in a bowl and whisk with a hand whisk until it produces soft peaks
- place the marscapone cheese, caster sugar and egg yolk in another bowl and mix with an electric whisk
- fold the egg white into the marscapone mixture to make the custard. Add a few drops of almond extract and stir in
- in a glass put a layer of softened biscuits with some coffee and then a thick later of custard on top. Dust cocoa powder on top
- repeat with another later of coffee and biscuits and custard and top with more cocoa powder
- finish with chocolate sprinkles
- put in the fridge for a few hours to set before serving 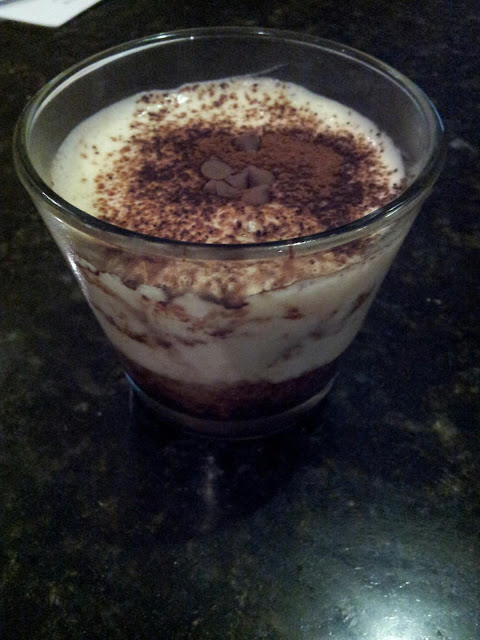 Posted by The Accidental Cook at Saturday, August 24, 2013