A Taste of the Coast

Some of the best dishes I cook have been inspired by things I have eaten on holiday. This summer N and I decided to have a staycation. We drove down to Sandbanks to spend a few relaxing days by the coast.Walks along the beach, hours of reading books in a cafe (far too cold to sit on the balcony sadly) and long leisurely dinners of fresh seafood. Bliss.

One of the restuarants we went to was a very trendy place called Club Shore. If you've ever been to Sandbanks I am sure you know of it, from talking to people it sounds like it's the place to be! We managed to book an table right by the window so our dining experience was accompanied by an unrestricted view of the sun setting over the sea. The view was beautiful and with the sun warming my face through the glass I honestly could have sat there forever. 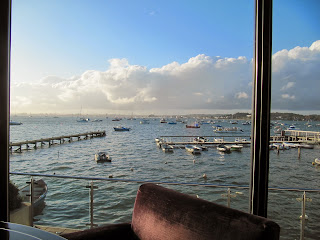 The special of the day was crab linguine with chilli and lime. I'm not a big fan of crab. I find it a bit bland and if the only way to make something taste good is for it to take up the flavour of something else I personally can't see the point. But it came highly recommended by the waiter so we tried it. I am so glad I did otherwise I would have missed out on discovering one of the easiest and tastiest dishes I have ever made. The linguine at Club Shore was made with white crab only which makes it look very elegant. The first time I made it at home I did the same and it tasted great.  But then someone suggested I use brown crab as well, as although it is a lot cheaper and hence food snobbery made me turn my nose up at it the first time, it really does turn this great dish into a fantastic one. It doesn't look as good but what it loses in aesthetics it makes up for in flavour. I now make it with a mixture of brown and white crab and throw a few prawns in to add some texture. This dish is quick and delicious and makes a regular appearance on our dinner table. I ration it to once a week as if I let N have his way I'm sure he would request it every night! 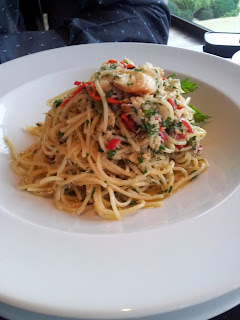 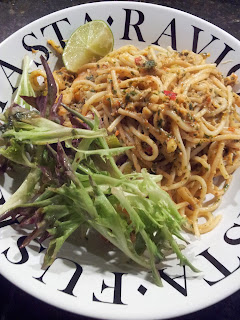 Crab Linguine Chez Preeti (not as beautiful but very very tasty!)
Crab Linguine with Chilli and Lime
(serves 2 | Total prep and cooking time less than 30 mins)
Ingredients
- Olive oil
- 120g dry linguine
- 100g brown crab meat
- 100g white crab meat
- 150g cooked king size prawns
- 1 lime - squeeze the juice out of half and keep other half for garnish
- 2 sping onions - chopped
- 3 cloves of garlic - finely chopped
- 1 small chilli - finely chopped
- 2 tablespoons finely chopped fresh parsley
- 125ml white wine
Method
- Cook the linguine according to the packet instructions
- Heat the olive oil in a large frying pan and fry the garlic and the spring onions until softened
- Add the chilli and stir for a few moments
- Add in the brown and white crab and the prawns.Stir well
- Add the white wine and cook on a high heat for approximately 4-5 minutes until most the wine has evaporated
- Stir in the lime juice and the parsley
- Drain the linguine, reserving the cooking water
- Add the linguine to the crab mixture and stir well. Add a little of the pasta water to loosen the dish and mix well on a low heat.
- Serve with a simple salad and a wedge of lime
﻿