I like most foods and will eat almost anything, but the one vegetable I can take or leave is cauliflower. It tastes bland and produces a slightly dodgy smell while you cook it. Every now and again I feel like I should give it another try and I look up some recipes, but the only ones I can ever find have it smothered in cheese, I think that says a lot! The problem is it is in season at the moment which means it regularly makes an appearance in my vegetable box. A few weeks ago I had a beautiful orange cauliflower. A friend of mine suggested a recipe for cauliflower couscous. It worked well. I blitzed the cauliflower in a food processor till it resembled couscous and then pan fried it with spring onions, tomatoes, garlic, lemon juice, and some herbs. I kept it a bit crucnhy for texture. I was elated, I had finally found a way to make cauliflower that I actually liked. It was a great accompaniment to some fish and meant we could have a carbless dinner for a change. 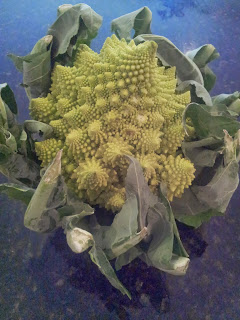 Then last week there was yet another caulifower in my box. Only this wasn't just any cauliflower, it was probably the most amazing vegetable I have ever seen. If you've ever seen it before you will now what I mean. It's called a Romanesco cauliflower. This beautiful vegetable forms a logarithmic spiral where each bud is composed of a series of smaller buds, all arranged in yet another logarithmic spiral. This repetitive pattern continues at several smaller levels forming something called a fractal. It amazes me how nature can produce something so mathematical and so astounding. 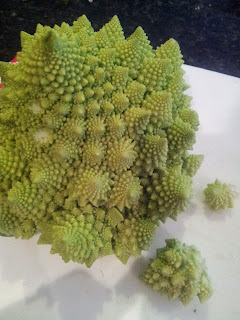 The minute I saw it it reminded me of the scaly skin of a dinosaur. A friend compared it to an alien! It looked so fantastic I couldn't bear to put it through I chopper and turn it in to couscous. I had to find a way of keeping the florets whole. I ended up adding some to my French fish soup and throwing a few in a stir fry. I think they would also make a great vegetable side dish particularly at Christmas as the florets look like mini fir trees! I wonder if it will still be in season then... 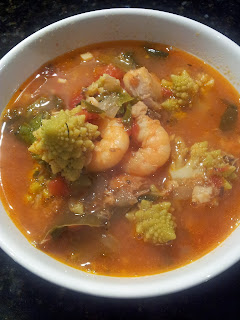 I still have some left so I am on the look out for some other ways to use it. If you have any suggestions for this wonderful mathematical cauliflower please do leave me a comment. Or if  you have any other cauliflower recipes that don't involve masking it with melted cheese I'd love to hear them!
Posted by The Accidental Cook at Monday, October 28, 2013