Muffins for an Autumn Day

Autumn.  It is without a doubt my favourite season. I'm not exactly sure why though. At the moment the only way I can describe the days are generally cold, wet and dreary. But there is something about the way the nights draw in and the leaves change colour that makes saying goodbye to summer a little easier. And on the rare occasion that we get a sunny day, like today, it reminds me why I love it so much.

The other great thing about the season is the variation in fruit and vegetables that becomes available. Normally I buy whatever I want whenever I want it, that's the beauty of supermarkets. But I am vaguely aware of how many miles my produce has travelled and how fresh it really is. And there is something very special about eating things grown on our home soil and supporting our local farmers. For this very reason I decided to sign up to receiving a weekly organic fruit and vegetable box. So far I am loving it. I have had so much fun finding new recipes and coming up with new ideas, especially because N is a creature of habit and often reluctant to try different things. My only real complaint is the boxes always seem to contain a cabbage and some apples! I guess it's because they are seasonal and grown abundantly in the UK but the cynic in me is convinced it's because they are cheap!

So this week my fruit bowl contained an awful lot of apples. And as they are not my favourite fruit I had to find a way of using them up. Normally I'd make a crumble but I find it's too much for just N and I to eat so I thought I'd make something that could be distributed. I decided to make some apple and cinnamon muffins. I had some raisins in the cupboard so I threw those in for good measure. I looked at a few recipes to get some ideas and then made one up based on the ingredients I had at home. A lot of recipes said to grate the apples but I found cutting them into chunks makes the muffins much more interesting and the taste of apples more noticeable. I invited a friend round for a coffee and we ate them warm, straight from the oven. The warmth of the cinnamon and the juicyness of the apple gave me a feeling of comfort from top to toe. If autumn could to be described by something edible then this would definitely be it. 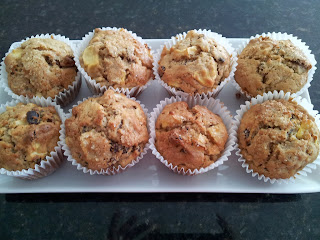 Method
- Preheat the oven to 180 degrees- Grease a 12 hole muffin tin or line with cases- Sift the flour, baking powder and cinnamon together into a large mixing bowl.- Stir in the sugar, apples and raisins until well combined- Whisk together the butter, eggs and milk until well combined. Add this to the flour mixture and stir with a large spoon until the ingredients are only just combined. Make sure to not over mix- Spoon the mixture evenly into the muffin tins- Sprinkle each with a little sugar on top- Bake for approx 20 mins until golden brown and cooked through. Check that a skewer comes out clean to make sure they are done.- Cool for a few minutes before transfering to a wire rack